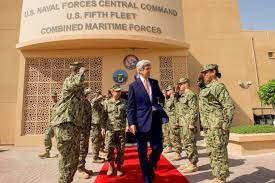 The Central Command for the Naval Forces stated Thursday that some mental health treatments are now accessible locally for U.S. personnel stationed in Bahrain, relieving them from the need to travel to the United States.

An inpatient stays in Bahrain for up to one month will be available to military families with acute mental health concerns as part of a two-year trial program, a statement from NAVCENT read.

Cmdr. Tim Hawkins told Stars and Stripes in an interview on Thursday that the new program also provides for extensive outpatient therapy.

There were previously no processes in place that allowed the military to send our service personnel and their families to Bahraini community-based doctors for skilled nursing facilities beyond one week, and intense outpatient treatment at all, Hawkins explained.

Hawkins estimates that there are around 6,000 American troops on active duty or in the reserves, 1,200 family members present, 500 military civilians, and 300 independent contractors.

Mental health services provided by the Veterans Affairs Department recommend inpatient therapy for those who are very sick or suicidal.

According to the 2012 edition of the mental health guidebook, inpatient therapy often involves medication and counseling in both individual and group settings.

Intensive outpatient care as specified in the same guidebook as a minimum of nine hours per week in a clinic to help control a serious mental disease.

According to Thursday’s announcement, Bahrain’s military conducted an assessment of its service members’ and their families’ mental health treatment choices in September 2021, and that analysis led to a pilot program.

The announcement comes at a time when the Navy is dealing with a spate of suicides. A total of 7 sailors belonging to USS George Washington have committed suicide since the navy ship began a refit at Newport News, Virginia, in 2019.

According to the Navy, all four deaths occurred within the previous year, with three occurring in a single week in April.

Last week, Russell Smith, the Master Chief Petty Officer of US Navy told Congress that it might take more than a month for sailors who are contemplating suicide to receive an appointment with a mental health professional in some areas.