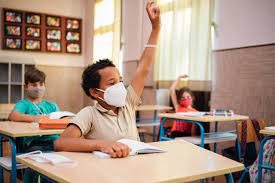 Even though at least 15 institutions failed to properly function this year, the Organization of Private Education claimed to have witnessed a rise in school attendance.

The ACPES released the findings of a survey on Monday that showed a decrease in SARS-CoV-2 illnesses among the learning institution, which could explain the increase in face-to-face lessons and school attendance.

In the recent 20 days, 92 percent of educational institutions haven’t recorded positive cases of coronavirus, according to the surveillance. The other 8% said that between 1% and 4% of their pupil had acquired the sickness within the same time period.

Furthermore, during the same 20-day period, 98 percent of public schools did not register sick workers, while 2 percent reported between 1 and 3 percent of their unwell workforce. During that time, private schools emphasize that no children or staff died from the sickness.

The poll also showed a decrease in dropout rates and an increase in face-to-face courses, which could be linked to the pandemic’s decreased incidence, according to Javier Hernández, president of ACPES. As per the survey, 51 percent of private schools indicated they had no dropouts, while 49 percent said that they had between 1 and 4%.

“As of this date in 2021, the defection rate was between 7% and 8%. “Clearly, the most devastating year for the schooling process, not just the government one, was the abandonment of the year 2020, which was the epidemic year, when a lot of parents decided to safeguard their children against the pandemic,” he continued.

As per ACPES, 53% of private institutions had the same or more enrollments in May than they did in 2021, while 47% had less. In comparison to 2020, 51% had the same or more people enrolled, while 49% had less. According to the organisation, 69 percent of schools have as much or more kids registered than in 2019, while 31 percent have less. Nevertheless, at least 15 schools have been unable to open this year.

“Till now, the face-to-face paradigm has been the one most preferred by fathers and mothers of households in the nation’s private schools,” said Hernández, who has previously highlighted the shortcomings of virtual classrooms. “As a result, we have a content development supply deficit,” he stated on Monday, “which now in 2022 is considered to be quite substantial gaps.”

The group requested that the Ministry of Education (MINED) conduct the AVANZO and Knowing My Accomplishment assessments in person based on the way of measuring. According to Hernández, the universities were also surveyed on this issue, and 81 percent thought AVANZO should be printed and distributed face-to-face this year, while 77 percent thought the same about Knowing My Accomplishment. “The findings would be more precise than if we continued to do them digitally,” Hernández added.