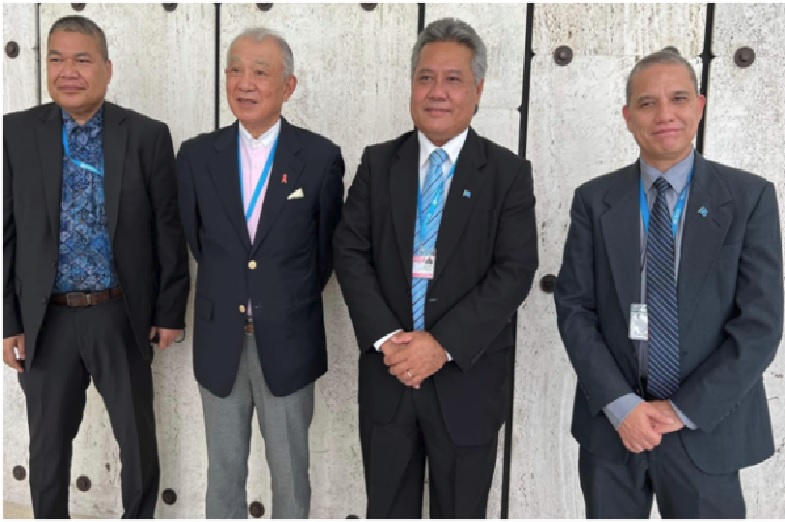 Mr. Marcus Samo, Secretary of Health and Social Services, met with Mr. Yohei Sasakawa, Chairman of the Sasakawa Health Foundation, during his trip to Geneva for the 75th World Health Assembly (WHA75). This meeting is significant because it follows Mr. Sasakawa’s continuing efforts to combat leprosy throughout Japan.

Sasakawa’s humanitarian initiatives have in the past contributed to the advancement of medical knowledge in FSM by dispatching Japanese healthcare workers, which also fostered more mutual understanding between Japan and Micronesia, as a result.

The Foundation also sent a small boat to the FSM to help with maritime surveillance and capacity building in the country.

Mr. Sasakawa reminisced about his journey to Pohnpei and an appearance on a local TV show with the President of the FSM to promote the FSM Government’s efforts to combat leprosy and the discrimination it causes. Leprosy is a global health scourge that Mr. Sasakawa urged Secretary Samo to continue to lead and support efforts to eliminate the disease in the FSM. Mr. Sasakawa, a frequent traveller to leprosy-endemic nations, expressed his dedication to this struggle and announced his desire to visit the FSM as soon as the COVID outbreak has subsided. President David W. Panuelo of the Federated States of Micronesia (FSM) was among Mr. Sasakawa’s earlier encounters with FSM leaders during the last Pacific Island summit in Japan.

Mr. Sasakawa’s efforts to rid the world of leprosy have been praised by FSM Secretary Samo on behalf of President Panuelo and the FSM Government, and he was thanked by Secretary Samo for his tireless efforts. When Mr. Sasakawa visited the FSM, Secretary Samo noted that he was a newly hired employee of the Government at the time. “The FSM’s pride in cooperating and enhancing the leprosy programme is a sentiment shared by Mr. Sasakawa, who remarked that the Government of Japan should continue and further expand the partnership,” he wrote in his letter.

COVID, according to Secretary Samo, has spurred the FSM to request a medical vessel that would be used to assist persons and communities in hard-to-reach regions throughout the FSM. As a result of the COVID outbreak, the FSM had been unable to host Mr. Sasakawa when he arrived. Sasakawa was encouraged to visit as soon as possible by the speaker.